3 Common Debates About the Modern Management of Crawl Spaces 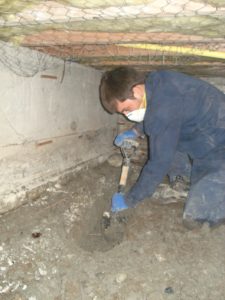 There are often intense debates among home-improvement experts about how to upgrade crawl spaces to create safe, comfortable homes. Many times, people from widely divergent places will have opinions on crawl-space management that are as far apart as their home locations.

Your own basement professionals have area-specific advice for your home’s construction type, soil makeup and local climate. If you do any of your own research on managing crawl spaces, you’ll find there are three main areas where contractors and home-energy experts offer contrasting opinions.

You Should/Should Not Have Ample Vents in Your Crawl Space

One of the most contentious debates in the contracting-HVAC-waterproofing world is whether or not to place vents in the crawl space foundation walls. Vents are provided to reduce the chance of moisture buildup in the crawl space. They’re also believed to help move stale or toxic air from the ground away from the home.

Larger vents are placed in unconditioned crawl spaces, not in heated or cooled crawl spaces. During the summer months, the vents will be opened to allow air flow. In winter, vents are closed to keep pipes from freezing.

People who believe in vented crawl spaces probably live in more arid areas of the world. When the air is dry, dew does not develop on ductwork and pipes at moderate temperatures. Condensation is not as likely to build up inside crawl-space ductwork.

If you live in a very humid environment, like the Pacific Northwest or the Southeastern U.S., you face extremely humid air that’s prone to creating dew. Dew is moisture that’s formed when the air is holding all of the water it can carry. If the temperature drops near the fully soaked air, condensation and dew form on surfaces.

If the air outside is more hot and humid than the air inside the crawl space, your crawl-space vents won’t help. Hot air is always drawn to cold air. Fully saturated warm air that enters your cooler crawl space causes the formation of wetness on ducts and pipes.

When water droplets from pipes and ducts continue to seep onto floor joists and other wood, the foundation of your home could be compromised. Mold and mildew develop. Insects and other pests are drawn to the moist soil and wood. For these reasons, liberally venting a crawl space in a moist environment is not recommended by many home experts.

You Should/Should Not Insulate Pipes and Ducts

Many homes are built with plumbing pipes in the crawl space. Ductwork from the furnace or air conditioner is often run along the crawl space, too. As noted very cheap Valium above, these crawl space features can create wet conditions under the home if you live in a humid environment.

There are other sources of moisture in the crawl space besides foundation vents. These include:

All of these wet conditions encourage weeping or sweating pipes and ductwork. For that reason, ducts and plumbing should be insulated along with the crawl space. It’s one of the surest ways to reduce the chances of moisture forming on these home components.

You Should/Should Not Condition the Crawl Space

Some contractors and home experts believe that conditioning the crawl space solves the moisture and evaporation issues. A heated crawl space is less likely to experience frozen pipes. A cooled crawl space won’t rob cold air from your AC ducts.

There are several drawbacks to heating and cooling the crawl space. One concern is whether or not your HVAC system is built to handle the heavier load. You could overwork your heating and air conditioning systems and cause them to age prematurely.

You also risk creating weird pressure conditions in the home. When the crawl space sucks air from your home’s system, your home is subject to a negative pressure situation. It’s similar to when you drink a bottle of water quickly without letting air into the bottle opening. The bottle is sucked into itself.

The same thing happens to your home when not enough air is returned to the home’s rooms to make up for the extra air sucked out by the crawl space. Your HVAC system may have to be completely revised to handle the load without causing pressure issues in your home’s air.

Heated and cooled crawl spaces put your family at a higher risk of being exposed to radon, molds and mildew. The air returned to your home from the crawl space can make your family sick.

Rather than going to the expense of heating and cooling the crawl space, choose encapsulation for the under-house area. A thick moisture barrier is installed to keep the moisture away from the foundation and your home. The encapsulation process also insulates the crawl space to protect the pipes from freezing. Insulation reduces energy loss from outside air.

Ducts and plumbing pipes can also be encapsulated to protect them from freezing temperatures, pests and moisture. Contact the encapsulation professionals at Perma Dry Waterproofing. to learn more about the benefits of this crawl-space upgrade.